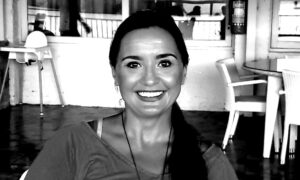 The Children of Biafra

Pitkin:  Masha, it’s great to talk to you. Your poem ‘The Children Of Biafra’ is haunting and moving.  Tell us what inspired you to write it.

MS:    My pleasure.  The poem “The Children of Biafra” was inspired by my experience of growing up in ex-Yugoslavia before the Bosnian War (1992-1995) and in the distant shadow of the Nigerian Civil War, fought between the government of Nigeria and the Republic of Biafra, a secessionist state which had declared its independence from Nigeria in 1967. This, more distant war, also known as the Biafra War, strongly influenced my parents’ generation and forced them to both embrace and reject the complex reality of what it means to live in the shadow of a civil war.

The Biafra War (1967-1970), which resulted in the deaths of more than a million people in Nigeria, happened a decade before my parents had children, but it served as a terrifying reminder that we are all only steps away from starvation, destitution, and death, and at the mercy of societal forces much greater than ourselves. In 1970 my mother was still a teenager, and Yugoslavia was still recovering from the devastation of WW2 and the genocide my people endured at the hands of the Nazi regime. At the time, food scarcity was a very real thing, and my mother would consider herself lucky if she had a piece of bread smeared with lard and sprinkled with red paprika to eat. As a special treat, kids would sometimes get bread with lard sprinkled with white sugar. Her younger sister, my aunt, who was still in elementary school at the time, would eat big chunks of the wall, to supplement for the lack of nutrients in their regular diet. Everyone was poor and everyone was hungry, but still there was a sense of hope, of some great, expansive shift, like a deep inhale, enveloping the nation. It was a feeling of satiety that went beyond food, a sense of certainty that there will never be another war fought on this land, which less than two decades later proved to be an outrageously naive and misguided notion.

And, at the same time, the children of Biafra, isolated from the world, unreachable, and beyond help were dying of starvation. That profoundly affected my parents and other young people of their generation and served to further solidify the notion that even once a war is over, suffering continues. In the shadow of a civilwar, you can never truly relax and let your guard down, because hunger and death lurk right around the corner, like crouching beasts, waiting to claim your and your children’s lives. So, as a direct consequence of this unspoken horror that my parents felt deeply lodged in their bones, I grew up with constant reminders of how lucky I was to have food to eat, any food. My brother and I were often forced to sit at the table until we had cleaned our plates, or served leftovers for the next meal, until no morsel was left, and no food was carelessly wasted. As a result, we felt deeply misunderstood by our parents and elders, because we were stripped of agency when it came to food.

Even in our dreams, we, the children of soon-to-be-ex-Yugoslavia, were haunted by the spectral images of Biafran (and later Ethiopian) children that we grew up with in the 1980s, resurrected through the stories told by our parents. But to me, a strange, maladjusted child that continuously questioned her own claim to humanity, these children were so much more than nameless, emaciated scarecrows meant to terrify me out of being a picky eater: they became my friends and accomplices in my stubborn refusal to comply and breathe in my parents’ fear.

I do understand my parents better now that I have my own children that I am unable to protect from the horrors of everyday life like a global pandemic–and their ill-conceived attempts to control the uncontrollable through the intake of food. Essentially, that is also the flawed logic of eating disorders, which I am intimately acquaintedwith.

I wrote “The Children of Biafra” because I wanted to remember the Biafran children of my childhood as more than the cautionary tales they became to my people; I wanted to see the wholeness of them, and not just the obvious and unfair reduction of their complex selves into flat, lifeless concepts of hunger and emaciation. And I wrote it because I still remember the kindness and expansiveness of the rare people who could see me outside of the confining tropes of the Bosnian War.

Recently, my dear teacher and mentor Dr. Bayo Akomolafe, who is Nigerian, invited us all to “pause and abandon solutionism, step back from the project of progress, and dance into a different set of questions. […] What happens when we unfurl into a space of slowness and relinquish human mastery to a wider cosmic net of relations?” This poem and the feeling it emerged from pours out of such an uncolonized, disorderly, impossibly and beautifully entangled place. It is an exercise in exploring the unsolvable complexity of our shared, human experience, an act of throwing a fishing net into the sea and bringing out human bones still vibrating with life. There may be no “solution” for the pain and suffering we both endure and inflict while wearing our human skins, but there is still joy.

Pitkin:  Wow.  That is fascinating, your experience and the way you link it to the experience of famine ravaged African children is both fascinating and emotional.  Thank you so much for sharing your words with us.

MS:  Thank you for inviting me.  I am now alumnus of Goddard having graduated in July 2021.  I am delighted to continue my relationship with the Goddard family in this way.

THE CHILDREN OF BIAFRA

Thank you,
Children of Biafra.
I have never met you.
You were the emaciated images
On my TV screen
I watched you starve for years
Long after they said the war was over,
As another war ate up
My own childhood.
I was too ashamed to look you in the eye
With my mouth full of
Bacon, bread, and garlic
My grandmother sliced paper-thin.
You were cutout dolls
Made to fit inside hollow skies,
Your hair black moss.
You never looked away
Your eyes said
No pity for me today, thank you.
I am who I am
And life is what it is.
Some starve
And some have so much
On their plate
They struggle to stuff it all
Into their mouths at once
And when they do
Their teeth do the chewing reluctantly
For hours
Like on a bone.
So eventually,
They get punished
By being forced to sit at the table
Way past their bedtime
Way past the news
Of neighbors slashing neighbors’ throats in Bosnia
Over-chewed food turned into gummy guilt
That makes someone
Maybe me
Puke it all on the kitchen floor
Which makes someone else
Maybe my father
Slam his fist on the kitchen table
And tell a woman
Maybe my mother
To clean it the fuck up.
Thank you,
Children of Biafra
For not swatting the flies
Away from the corners
Of your almond eyes
As you died on our TV screens.
Your bracelets too large for your wrists
Your heads and bellies
Too big for your doll bodies.
Thank you for sitting with me
At my kitchen table
Staring down my parents
When they called you by your TV names
And said:
Children in Biafra are starving
And look at you playing with food
When they really wanted to say
Thewarthewarthewarthewar.
So we are starving,
You said to my parents,
So we are.
And if we weren’t
We would also be making clock towers
From bread and bacon
And oceans from pea soup
With little pea people
Drowning in it
And sometimes surviving
And loving each other enough
To drown together.
We are starving, yes,
But so are you.
Look into our eyes;
Do not pity us.
Weareweareweareweare.
Swollen bellies and flies
Are just wrapping paper.
So eat your food
Not because you can
But because
It hops in your mouth
Like a rabbit
Made of wet earth
And joy.

Masha Shukovich, PhD is a writer, poet, storyteller, folklorist, teacher, and intuitive chef with ancestry and indigenous roots in the Balkans; the Mediterranean; and West, Central, and Northeast Asia (Siberia). She is the mother of Maya and Leela, a demigirl (she/they), a neurodivergent/autistic person, and an immigrant from a country that no longer exists.

She lives on Utah trails and online at http://www.mashashukovich.com/.